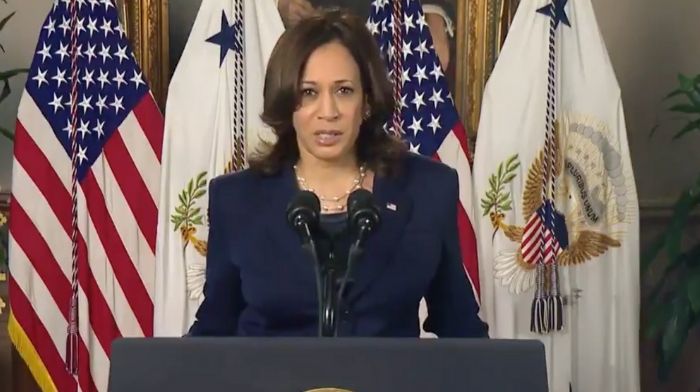 Vice President Kamala Harris celebrated International Women’s Day on Monday by giving a speech in which she complained that “our world does not yet work for women as it should.”

“Today the global crises have made abundantly clear both the contributions of women and the challenges facing women,” said Harris, who is the first female Vice President in United States’ history.

“Simply put: Our world does not yet work for women as it should,” she added. “COVID-19 has threatened the health, economic security, and physical security of women everywhere.”

“The pandemic has overloaded healthcare systems, making it even harder for women to access the care they need,” Harris continued. “Women comprise 70 percent of the global health workforce, putting them on the front lines and at risk of contracting the virus.”

Related: Gaetz Questions If ‘Transition To Harris Has Already Begun’ – ‘Joe Biden’s Had More Nap Time Than He’s Had Questions From Reporters’

.@VP Kamala Harris: “Our world does not yet work for women as it should.” pic.twitter.com/axCuXYftgp

This comes as President Joe Biden is preparing to celebrate International Women’s Day by signing two executive orders that will try to increase “gender equality.” His orders will reportedly launch White House “Gender Policy Council”  designed to tackle issues such as sexual harassment and equal pay. It will also focus on “intersecting forms of discrimination,” including people who identify as “LGBTQI+.”

“The White House Gender Policy Council will be an essential part of the Biden-Harris Administration’s plan to ensure we build a more equal and just society – by aggressively protecting the rights and unique needs of those who experience multiple and intersecting forms of discrimination, including individuals who are Black, Latina, Native, Asian American and Pacific Islander, people with disabilities, and LGBTQI+,” read a statement released by Biden’s White House.

“This is a matter of human rights, justice, and fairness,” the statement continued.

Related: Jen Psaki Defends Biden And Kamala Harris For Not Saying Anything About Cuomo Scandal

The second order Biden is signing will call upon the Department of Education to review policies as part of an effort to protect students from sexual violence.