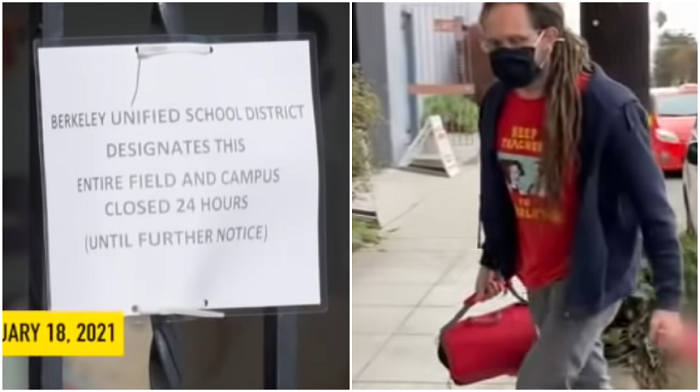 Matt Meyer, president of the Berkeley Federation of Teachers and advocate for stalling on schools re-opening during the pandemic, has been caught on video dropping his daughter off to in-person pre-school.

Meyer has called for public schools in the district to remain closed until teachers are vaccinated, among a number of other requirements.

The union recently announced a tentative plan to return kids to a hybrid plan for learning in the spring.

KQED reports that “some Berkeley parents have claimed that the union is moving too slow” in regards to school closures.

All schools in the Berkeley Unified Public School District (BUSD) have been closed since March of last year.

A group known as Guerilla Momz filmed Meyer dropping his daughter off to pre-school and branded him a hypocrite.

“Meet Matt Meyer. White man with dreads and president of the local teachers’ union,” they tweeted along with the video. “He’s been saying it is unsafe for *your kid* to be back at school, all the while dropping his kid off at private school.”

RELATED: Trey Gowdy Blasts Chicago Teachers Union: ‘If You Don’t Want to Teach, Go Do Something Else’

Matt Meyer defended dropping his child off for in-school learning while the rest of the school districts under his purview must wait to re-open.

“There are major differences in running a small preschool and a 10,000 student public school district in terms of size, facilities, public health guidance and services that legally have to be provided,” Meyer told Fox News.

“We all want a safe return to school.”

Meyer also said the video is “very inappropriate” and an intrusion of his child’s privacy.

Jonathan Zachreson, the founder of Reopen California Schools, said parents might not view things quite the same way.

With smaller children “they’re probably interacting even more than you would at school,” Zachreson said. “So it’s the hypocrisy that’s really frustrating.”

“Why is it safe for him but not the rest of BUSD families?” Zachreson’s group asked.

.@BerkeleyUnified Union President Matt Meyer says it’s still too “unsafe” for you to send your kids to school.

Here he is dropping his own daughter off at a private, in-person school.

They are lying to you. pic.twitter.com/qKDZ6bVSnW

Another California Liberal Caught Being a Hypocrite

Hypocrisy seems to be prevalent in California, as Democrat Governor Gavin Newsom has again come under fire for posting a video that shows him indoors at a restaurant in a county where indoor dining is not allowed.

Newsom assured his state’s resident that he didn’t eat there, however.

Look at the table and decide for yourself. They were there for an hour. pic.twitter.com/1spIyiC4vT

“Newsom claims he did not dine while visiting with the owners of the Los Amigos Mexican Restaurant … despite a TikTok video filmed of the event appearing to show a table full of drinks,” the Daily Mail reported.

Newsom was widely viewed as a hypocrite for failing to follow his own lockdown rules late last year, attending a maskless indoor dinner at a restaurant known as The French Laundry with roughly 22 people.

EXCLUSIVE: We’ve obtained photos of Governor Gavin Newsom at the Napa dinner party he’s in hot water over. The photos call into question just how outdoors the dinner was. A witness who took photos tells us his group was so loud, the sliding doors had to be closed. 10pm on @FOXLA pic.twitter.com/gtOVEwa864

Last month, California school board members came under fire after “truly inappropriate comments” were made during a videotaped board meeting.

“It’s really unfortunate that they want to pick on us because they want their babysitters back,” School Board President Lisa Brizendine said in the video.

Another threatened parents with violence while yet another insinuated parents needed daytime babysitters so they could smoke pot during the day.

Former Congressman Trey Gowdy railed against teachers’ unions for fighting a return to schools last month saying, “If you don’t want to teach, go do something else.”

“Teaching is hard work even without a pandemic … I get it,” Gowdy said, “But if you don’t want to teach, go do something else.”

Matt Meyer found a way for his kid to get back into the classroom. Surely he can do the same for other children in California.

Remembering Andrew Breitbart, Nine Years Later – And Our Blueprint For The Future

The Most Scandalous Provision of the $1.9T Biden Boondoggle