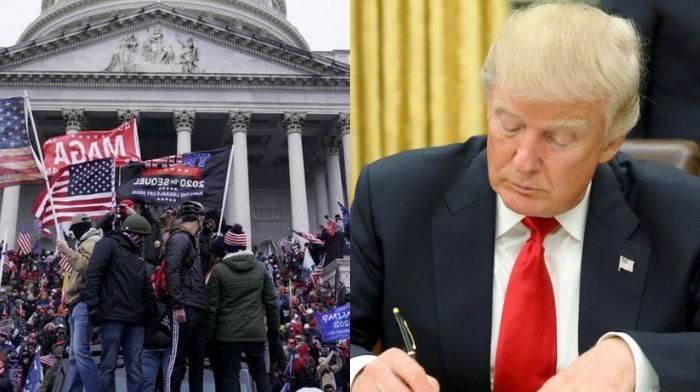 The supporters of Donald Trump who stormed the Capitol on Wednesday may end up in prison for up to ten years thanks to an executive order the president signed just a few months ago.

Last summer, Trump signed an executive order to protect national monuments and memorials in the hopes of dissuading “anarchists and left-wing extremists” from destroying public property as racial protests spread all over the country. Now, however, it might be some of his own supporters who end up in prison because of the order.

Attorney General Jeffrey Rosen released a statement on Thursday promising that those who stormed the Capitol the day before will be held legally responsible.

“Yesterday, our Nation watched in disbelief as a mob breached the Capitol Building and required federal and local law enforcement to help restore order,” Rosen said. “The Department of Justice is committed to ensuring that those responsible for this attack on our Government and the rule of law face the full consequences of their actions under the law.”

“Our criminal prosecutors have been working throughout the night with special agents and investigators from the U.S. Capitol Police, FBI, ATF, Metropolitan Police Department and the public to gather the evidence, identify perpetrators, and charge federal crimes where warranted,” he added.

“Some participants in yesterday’s violence will be charged today, and we will continue to methodically assess evidence, charge crimes and make arrests in the coming days and weeks to ensure that those responsible are held accountable under the law,” Rosen said.

The executive order that Trump signed in June states that “any person or any entity that destroys, damages, vandalizes, or desecrates a monument, memorial, or statue within the United States or otherwise vandalizes government property” is subject to a penalty of up to 10 years in prison.

Though Rosen did not specifically mention the executive order, it seems likely that it will come into play given the fact that some of the rioters damaged furniture and smashed windows within the Capitol building.

This piece was written by James Samson on January 8, 2021. It originally appeared in LifeZette and is used by permission.