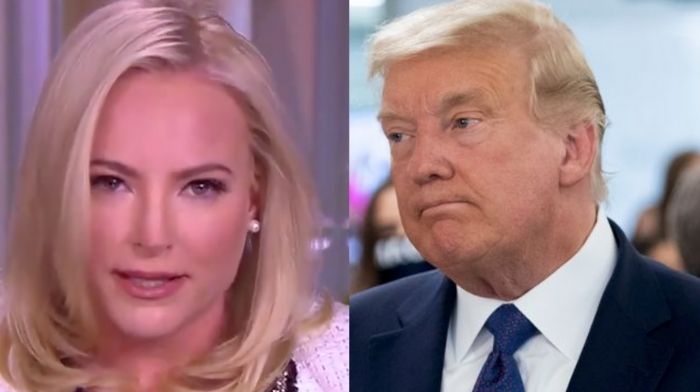 On Thursday’s episode of “The View,” Meghan McCain became visibly emotional as she discussed the Capitol Hill protests from the day before and begged Republican lawmakers to remove President Donald Trump from office by invoking the 25th Amendment.

“This is one of the great national tragedies of my lifetime, this is one of America’s darkest days. I have been absolutely despondent watching this, I’m here in D.C. as everyone knows,” McCain said. “My sister-in-law works on Capitol Hill and the office door where she works, the window was busted out.”

“The bedrock of our democracy and the bedrock of who we are as Americans is the peaceful transition of power and he is clearly a president who has turned into a mad king,” McCain added. “At this point, I’m calling on all Republicans and conservatives, who still have clout, we have to invoke the 25th Amendment. We cannot withstand this. Our country cannot go on like this.”

.@MeghanMcCain: “[Trump] is clearly a president who has turned into a mad king, and at this point, I’m calling on all Republicans and conservatives who still have clout—we have to invoke the 25th Amendment. We cannot withstand this. Our country cannot go on like this.” pic.twitter.com/2LxaUnS11l

This comes as various Democratic representatives have called for the 25th Amendment to be invoked, a move that would allow Vice President Mike Pence to become the acting president if he and the majority of the Cabinet declare Trump to be unfit to carry out his duties.

However, a two-thirds majority in the House and Senate would need to agree, according to Fox News.

McCain became more and more upset as she continued talking about the protests on Wednesday.

“Yesterday when I was watching the footage, these bastards are using the American flag as symbols as they are attacking our own republic, the same flag that our veterans at Iwo Jima held after World War II,” McCain said.

“You are not patriots, you do not represent America, you are scum of the earth who are using, abusing and bastardizing all that I love and have grown up with for your own sick agenda,” she added.

“That agenda has been directly, directly sent by President Trump and then he didn’t disavow it, he didn’t send in the National Guard and then he called them special and said he loved them,” McCain continued.

As she became visibly emotional, McCain concluded by saying that this was a “national embarrassment” and urging the removal of Trump from office.

“We have to get him out immediately because this cannot stand,” she said.