Joe Scarborough Questions ‘How Many Of These Capitol Hill Cops Are Members Of Donald Trump’s Cult?’ 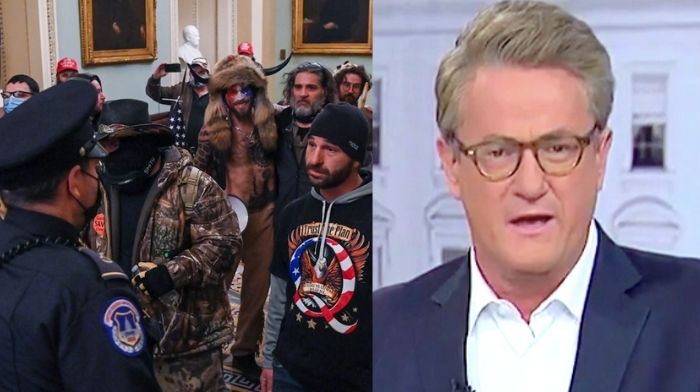 MSNBC host Joe Scarborough had a full meltdown on his show on Thursday morning, blasting Capitol Hill police over the violence that ensued when supporters of Donald Trump stormed the Capitol the day before.

As his voice grew audibly louder with anger, Scarborough questioned why the police officers allowed the “insurrectionists” inside the building and “walk through freely.”  He then baselessly argued that if the Trump supporters had been black or Muslim, they would have been “shot” and “sniped.”

“There has to be an investigation,” Scarborough exclaimed. “How many of these Capitol Hill cops are members of Donald Trump’s cult? How many? How many allowed this to happen? And I do want to know where the hell were the D.C. police? … How did this happen? This hasn’t happened since the War of 1812 when the British stormed Washington, D.C. It’s obvious this was coming. Donald Trump promised this day was coming.”

Related: Joe Scarborough Rips ‘Trump Cult’ – Tells Them To Get Help From ‘Mental Health Providers’ Instead Of Church

“Was it OK because they are white? I just have to ask,” his co-host and wife Mika Brzezinksi asked.

Scarborough only became more unhinged from there as he began full-on yelling as he continued.

“So, I want to know from the Capitol Hill police, what is it, is it just white people or is it Donald Trump supporters? Why do you scream at people for walking across the street three blocks away from the Capitol?” he yelled.

“Why are you known as badasses around the Capitol, but then Trump supporters come in and you open the f*cking doors for them? You open the doors for them and let them breach the People’s House! What is wrong with you?” he concluded.

Related: Joe Scarborough Claims President Trump ‘Would Shoot Us If He Could’

Scarborough was a Republican for years before President Trump took office. Since then, Scarborough has become just another member of the liberal media who spends the entirety of his show hurling deranged attacks at Trump and his supporters on a daily basis.