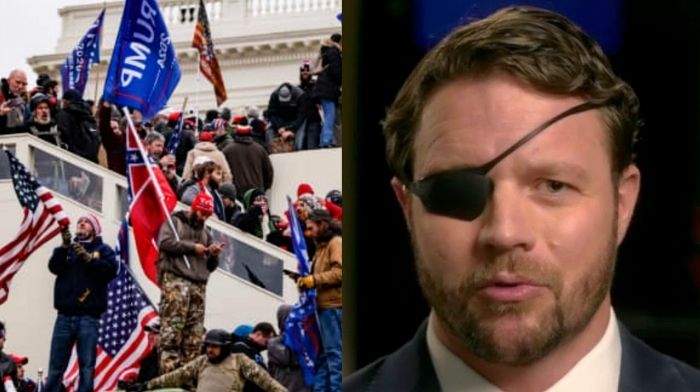 Rep. Dan Crenshaw (R-TX) went on Fox News on Wednesday night to condemn the protests happening in Washington D.C. and to call on President Donald Trump and anyone else objecting to the Electoral College to tell those who stormed the Capitol “that they misled them.”

“This is not what you do and call yourself a patriot. There’s nothing to be proud of here. This is not okay. It should be condemned to the fullest extent,” Crenshaw said. “So many hyped up this day as this day of reckoning, as this big win that would happen.”

“So many told — so many people said this would be the last stand, the last fight, the last effort to win back the republic. It’s our 1776,” he continued. “When you use that kind of language, you should not be surprised that people tend to believe it.”

“This is exactly what we could expect every single time if we decide that this process is constitutional, this objection process, and we decide that Congress can simply overturn electors,” Crenshaw added.

Not stopping there, Crenshaw called on Trump and anyone else objecting to the Electoral College to take action.

“This isn’t okay. I want them to say that they were — that they misled them,” Crenshaw added. “Because I think that’s really what happened here. And that message has to be far more forceful than it’s been.”

During the protest, Crenshaw had written in a blunt tweet that appears to have been deleted, “Stop this bull**** right now.”

“I like many people voted for President Trump in the 2020 election and hoped for a different result,” tweeted McCaul. “But violence and destruction is not the way to express your grievances. This is disgraceful and has to end.”

Joe Scarborough Questions ‘How Many Of These Capitol Hill Cops Are Members Of Donald Trump’s Cult?’