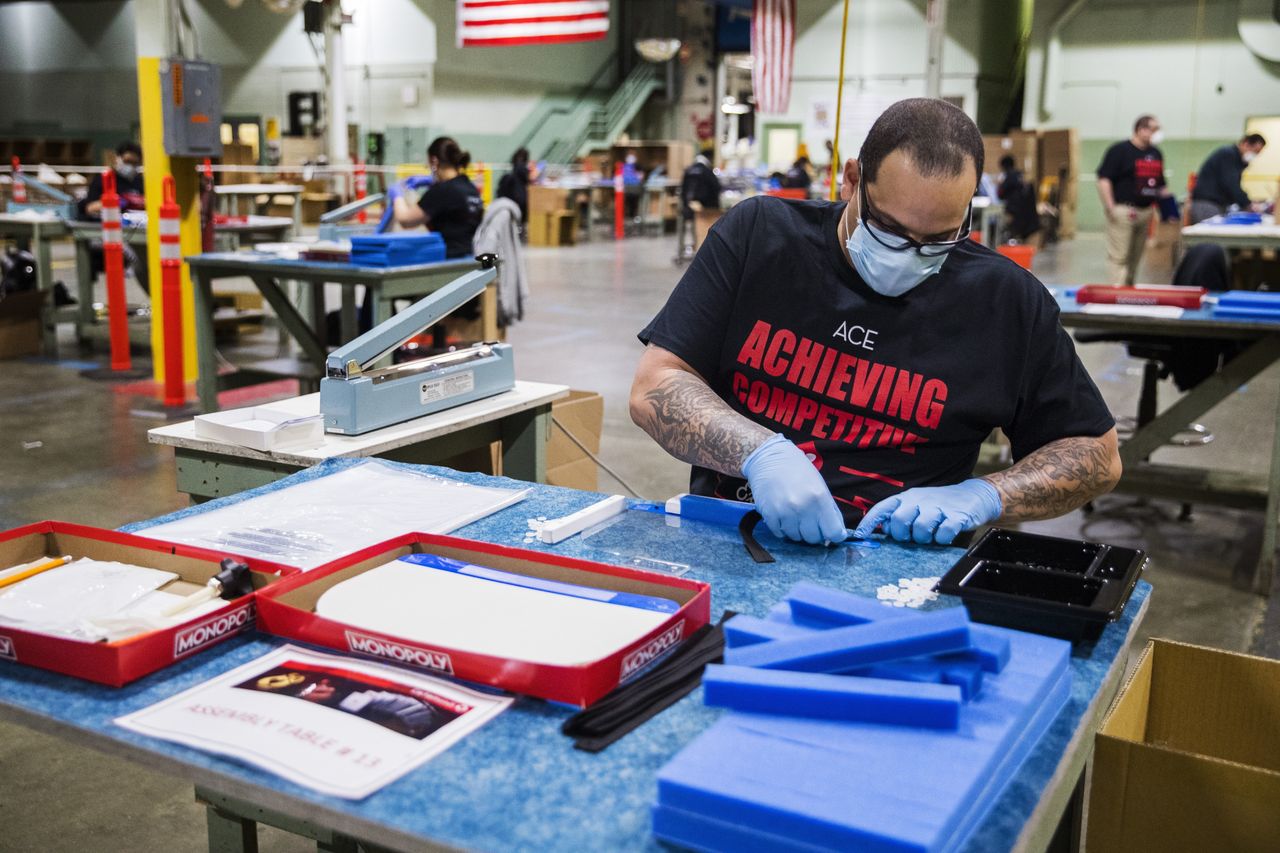 U.S. factory output continued to grow in August, but the picture for employment was mixed, a possible sign of lingering uncertainty about the coronavirus pandemic among American manufacturers. A survey of purchasing managers compiled by the Institute for Supply Management found that U.S. factory output advanced in August at the fastest pace since November 2018. But firms continued to cut workers, reflecting a wariness about future prospects and health concerns. Sluggish employment, if sustained, could pose a threat to the recovery just as the economy is starting to pick up following several months of pandemic-related lockdowns. Other manufacturing powerhouses such as China and Germany also saw continued contraction in factory employment, Paul Hannon and David Harrison report.

The ADP employment report for August is expected to show a gain of 1.17 million jobs from the prior month. (8:15 a.m. ET)

Bank of England Gov. Andrew Bailey appears before the Treasury Committee to discuss the economic impact of coronavirus at 9 a.m. ET.

China’s Caixin services index for August is out at 9:45 p.m. ET.

How’s the Coronavirus Economy? Depends Who You Ask.

The coronavirus recession has been financially devastating for many Americans. It has been a boon for others. Those with secure jobs, stuck at home with fewer places to spend money, came out ahead. The stock market, predominantly owned by the wealthiest Americans, has returned to record levels. For others, the federal government rushed in with additional unemployment benefits, stimulus checks and a moratorium on evictions and foreclosures. But the ranks of the struggling are growing. The $600 in additional weekly unemployment benefits expired in July. People have largely spent the stimulus checks they received in the spring. Lenders are bracing for more people to fall behind on debt payments. Almost 11% of U.S. households didn’t have enough to eat in the previous seven days, as of July. That number was about 4% in 2018, Ben Eisen reports.

The Labor Department is adjusting its methodology for calculating seasonally adjusted jobless claims, a shift that will show up for the first time in Thursday’s weekly report. Normally, the seasonal adjustments are meant to account for regular swings in layoffs that occur during certain times of the year, such as around holidays. The coronavirus, however, didn’t align with historical patterns and likely led seasonal adjustments to overstate the actual number of weekly unemployment claims. IHS Markit estimates that if the Labor Department had changed its data methodology at the beginning of the pandemic, the cumulative number of seasonally adjusted jobless claims could be about 4 million lower. This sort of change, while notable, shouldn’t alter the larger labor-market narrative: Claims, a proxy for layoffs, remain historically high, but have come down significantly since peaking in March. —Sarah Chaney

Help Me Get My Feet Back on the Ground

Treasury Secretary Steven Mnuchin urged Congress to appropriate more money to combat the effects of the coronavirus pandemic. For more than a month since key provisions of the landmark Cares Act expired, Democrats and Republicans have been at loggerheads over the size and content of another relief package. Mr. Mnuchin said at a hearing Tuesday he was ready to sit down with Democratic leaders to resume negotiations at any time, Paul Kiernan reports.

A top Federal Reserve official said the economy faces substantial risks, including the premature withdrawal of government spending to support growth. The risk of permanent layoffs and business bankruptcies will rise the longer uncertainty related to the coronavirus pandemic remains high, Fed governor Lael Brainard said. Ms. Brainard singled out additional government spending and related fiscal policy as a key factor that would influence the pace of any recovery, Nick Timiraos reports.

Copper prices hit a two-year high on evidence that China’s economic recovery motored ahead in August, extending a recent rally for the industrial metal. Nickel, zinc, lead and other industrial metals also advanced, spurred by data showing that Chinese manufacturing activity last month grew at its fastest pace in almost a decade. Chinese growth is a key determinant of copper prices because the world’s second-largest economy accounts for around half of global consumption of the metal, Joe Wallace reports.

Germany’s economy is recovering faster than was anticipated, helped by a mild and short coronavirus lockdown, a large-scale fiscal stimulus and Berlin’s close trade links with China. The country’s gross domestic product should contract by 5.8% this year, a 0.5 percentage-point improvement on earlier forecasts, the economy ministry said on Tuesday. Germany’s growth upgrade reflects the nation’s success in cushioning the coronavirus’s economic toll thanks to a light lockdown that left most factories and offices open, large-scale testing that helped to keep Covid-19 casualties low and heavy government spending that kept the pockets of furloughed workers topped up throughout the downturn. Europe’s largest economy, traditionally reliant on international trade, is also benefiting from a marked rebound in China and other Asian countries, Tom Fairless reports.

Children of parents who lose jobs around the time of a major educational decision end up earning less money than their peers. “The earnings gap comes, in part, from those children’s reduced likelihood of completing college…. Parents who doubt they will have the money to help with future college expenses may seek a less expensive path for their child,” Bernhard Schmidpeter finds in a paper for the Upjohn Institute.